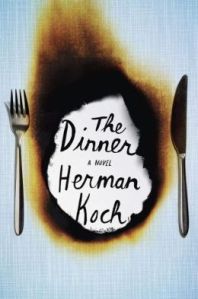 What is it about horrible characters that can capture and hold my attention, and then leave a sour taste afterwards, with a depressed feeling of having wasted a day in reading about them?  Gillian Flynn did it in Gone Girl, and now the Dutch writer Herman Koch has repeated that hypnotic guile in The Dinner.

As he marches his characters through a family dinner at an elite restaurant, the innocuous descriptions of fussy waiters and overpriced food lull the reader into wondering why the tale had been listed as a thriller.  Slowly, the inadequacies and quirks of Paul, the history teacher whose psychiatric disorder has forced him to take a leave of absence, and Serge, his brother, the aspiring prime minister with a penchant for control and overeating, escalate from petulant commentary to sinister foreboding.

The parents have met for “the dinner” to discuss their children – teenagers whose recent horrendous criminal action (no spoiler here), recorded by a security camera, has gone viral on the internet – with the faces of the boys unrecognizable to all, except their parents.  The pressure increases when one of the boys uses his phone video posting on YouTube, with more specific identification of the perpetrators,  to blackmail the others.  The parents are meeting at “the dinner” to decide what to do.

As the courses are served, Koch uses the narrator, Paul, as an observer of the inadequacies of the world in general; his thoughts seem benign and a little caustic, but soon the inferences become prejudicial and sarcastic. No one is innocent, moral, or with any semblance of conscience, and parenting is an exercise in avoidance, bad example, and promoting bad behavior in the interest of protecting one’s child.

Like Gone Girl, this tale is told by an unreliable narrator, who is at once unlikable yet compelling, and with twists in the story that are disorienting.  If you like to get your thrills through skeptical illustrations of the dark side of the mind, you might appreciate Koch’s manipulations – and wonder if those around you, who are seemingly normal, are just one close step from becoming dangerously asocial.

7 thoughts on “The Dinner”