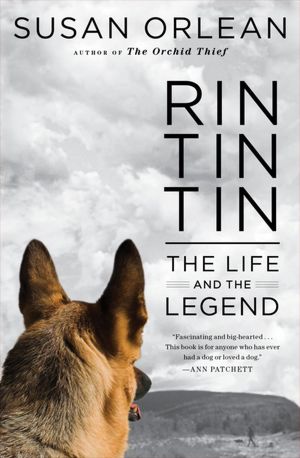 With the determination of a fervent researcher, Susan Orlean reveals the story behind a canine dynasty in Rin Tin Tin.  Tracing back to the first dog’s owner, Orlean follows Rin Tin Tin as a war orphan puppy  through the generations that followed.

Orlean not only carefully documents the first Rin Tin Tin’s life with memorabilia and papers from his owner, Lee Duncan, she also editorializes her mission.

“Could it be that we fill out our lives, experience all that we experience, and then simply leave this world and are forgotten? I can’t bear thinking that existence is so insubstantial… a race against this idea of disappearing…the narrative of Rin Tin Tin…was the tale of lost families…of the way we live with animals…the story of an extraordinary journey…he could leap twelve feet, and he could leap through time…”

The story is extraordinary – from the first dog star on the silent movie screen to vaudeville and then the idea for his progeny to star on television in the fifties.  Unfortunately, Rin Tin Tin IV was not the major actor in the television series – only the back-up to the renamed and more talented dog Flame, who did “all the work for Rin Tin Tin.”  Whether or not the line from the first war dog was unbroken is ambiguous, but Orleans clearly applauds Duncan’s affinity for dogs and his training – “he was a dog man who happened into Hollywood.”  Subsequent generations of German Shepherd television stand-ins benefitted from the fame and skill of that first Rin Tin Tin.

Orlean’s tone is detailed and conversational with clear historical perspective; sometimes  she gets carried away with more than you need to know, but she is clearly enamoured of her topic.  For dog lovers, the poignant moments are irresistible, but her diversions into accounts of the wars, other trainers, and her comments on dog training and the world in general often get in the way of the story you want to read – sometime blurring the focus from Rin Tin Tin.  In her efforts to fill in every detail, she detours into franchise lawsuits, imposters posing as former child stars, would-be trainers claiming the name for dog food; the Rin Tin dynasty gone awry.

Aside from her penchant for sifting through endless minutia and including it in her narrative, Orleans is the kind of writer who makes you feel that you know her personally.  As she mulls over some piece of information or her grandfather’s toy Rin Tin Tin, she makes you feel you are in the room with her.  If you can persevere through her long episodes, you will learn something about her as well as about the dog. Orlean believes …

Look for a Review: Type in the Title